Brian Overton is a Co-Worship Leader at St. Anne’s Episcopal Church. Outside of his fellowship, Brian is also passionate about music production, which he offers via in-house recording studio, Green Room Studio.

A devout Christian, Brian Overton’s faith has always been central in his life.  Fellowship, naturally, has accompanied Brian’s passion for Christianity.  He enjoys engaging in regular Bible study and doing his part at church events and activities hosted by St. Anne’s Episcopal Church.  As a Co-Worship Leader, Overton is very involved with the church’s many programs, including youth camps and the DaySpring Conference Center activities. 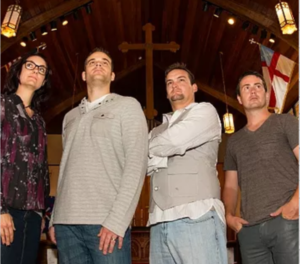 Brian Overton is also a Christian Contemporary Musician.  An enthusiast of the genre all his life, Brian has expressed himself through music-led worship for years.  As the bass player and singer of His Word, a CCM rock band, Brian enjoys the opportunity to glorify God with his own God-given and earned musical talents.

His Word band has opened for well-known CCM recording artists, StorySide B and former lead guitarist of the Newsboys, Paul Colman.  They’ve also enjoyed radio play on stations like 88.1 JOY FM and 91.9 Call FM.  A founding member of the group, Brian has been active in the band’s creative process every step of the way.  He co-wrote many of the songs off of their debut album, Silent, Bold and True, released in 2007.  Overton also continues to tour with the band, performing locally at church events and coffee shop sessions.

On his blog, Brian Overton reviews new and old tunes in the Christian music genre and its subgenres.  Shining the glow of the spotlight on newcomers of the stage, Brian is certain that you’ll find your new favorite CCM from his series!  If you are a CCM yourself, feel free to reach out for a feature.

Ever since he was a little boy, Brian Overton has been an avid fan of all things Marvel!  From the comics to the movies, Overton loves it all.  The characters and Marvel Universe created by Stan Lee have always both amazed and inspired this Marvel fan.  His favorite most recent Marvel movie is Avengers: Endgame (2019).  But his all-time favorite would have to be The Incredible Hulk (2008).  In the future, Overton hopes to review Marvel movies and comics on his official website.  Stay tuned!