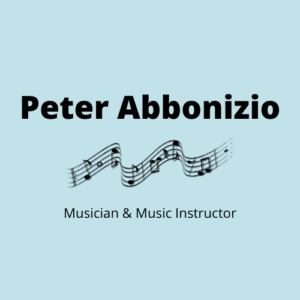 When people ask Peter Abbonizio what got him into making music, his response is known to turn a few heads!  (Especially when you consider the digital direction his work has gone in over the years.)  The answer is:  Peter Pan.  After watching an NBC rebroadcast of the original 1955 rendition of the musical, Peter Pan, a young Abbonizio found himself in awe… not just with the choreography, but with the music production of it all.  He immediately fell in love with, and continues to appreciate, the incredible way that music tells a story — often without words.  It’s a concept that he often makes the centerpiece of his works, which tend to be instrumental and without lyrics.  Displaying emotion and telling a story without words is the ultimate musical challenge.  But it’s one Abbonizio loves to take on!

Peter Abbonizio loves introducing others to the world of making music.  In particular, he enjoys teaching his students how to make digital instrumentals.  He currently teaches the basics of digital music production, such as beatmaking and how to make background music for short films.

As an independent music artist or musician, publishing your music online isn’t always as simple as it seems.  An expert in all things digital music, Peter Abbonizio is well-versed in the process of submitting singles and even full length LPs to the top music streaming platforms, such as Apple Music and Amazon Music.  He currently offers indie artists consultations that help take their music to the next level —  literally.  Because once your music goes digital for all the world to hear, you’ll finally have the chance to have your art heard!