Paul Cazarez is a Principal World Builder and Digital Creator who breathes his imagination into larger-than-life environment modeling projects. Outside of his professional work, Cazarez is passionate about promoting programming and computer science to the next generation. 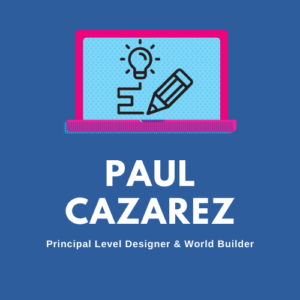 Principal World Builder, Paul Cazarez is best known for his contributions to the worlds of Ratchet and Clank, Blood Omen and Whiplash (just to name a few titles).  Guided by his passion for creating larger-than-life environments, Cazarez has proudly contributed to some of the most beloved franchises from the last two decades.

Paul Cazarez maintains academic qualifications from both the High Tech Institute of Arizona (Class of 1996) and the Art Institute of Phoenix (Class of 2000).  In both of these pursuits, Cazarez developed his computer programming and digital content creation skills.  Laying the groundwork for his career as a Principal World Builder, Cazarez found his footing in the 3D modeling and environment modeling areas of digital entertainment with his pursuits at HTIA and AIP.  In the future, he hopes to connect with aspiring world builders and environment creators who are currently in pursuit of STEM (Science, Technology, Engineering and Mathematics) studies, both at his alma mater and beyond.

Paul Cazarez currently maintains the role of Principal World Builder.  This experience is far from his first in the area of developing digital worlds.  A veteran in the space, Cazarez’s imagination has been applied to the development of digital environments in hundreds of beloved titles, including Whiplash, Ratchet and Clank, Blood Omen 2 and many more.  An expert in 3D modeling, his portfolio includes a diverse range of digital creations across computing platforms.